By John Greenleaf Whittier [Public domain], from Library of Congress via Wikimedia Commons. “Broadside publication of John Greenleaf Whittier’s poem Our Countrymen in Chains. The design was originally adopted as the seal of the Society for the Abolition of Slavery in England in the 1780s, and appeared on several medallions for the society made by Josiah Wedgwood as early as 1787. Here, in addition to Whittier’s poem, the appeal to conscience against slavery continues with two further quotes. The first is the scriptural warning, “He that stealeth a man and selleth him, or if he be found in his hand, he shall surely be put to death. “Exod[us] XXI, 16.” Next the claim, “England has 800,000 Slaves, and she has made them free. America has 2,250,000! and she holds them fast!!!!” “

(Here’s a link to a  printed copy of Whittier’s poem, published in a newspaper called the Signal of Liberty in 1842.)

Most days I am of two minds, a state of being I’m sure I share with many other people: should I try to save the world, or a small part of it, through a prosy speaking out (evidence and argument) or should I try to save my soul, to take pleasure in a more personal, private activity, which for me is the sound and sense of poetry? Put another way– activist or artist? Human energy and concentration are finite, and subject to moods. And that’s the way we’re raised– one job, one profession– choose.

Given the current market/demand for poems, the general sense, as W.H. Auden said, that “poetry makes nothing happen,” it seems selfish and useless to indulge too much in lyricism, a kind of fiddling while Rome burns, though Nero would have used a lyre. Nero’s supposed escape into poetic song is still a symbol of arrogant indifference to the fate of others.

A war correspondent, for example, is afforded more credit and credibility than a poet penning a poem on the front lines (or from far away) that is destined, if lucky, for an obscure literary journal.  From Nero’s irresponsible image may come the expression “fiddling around” as metaphor for doing nothing much or nothing well. If you want to change the world with words, you get into journalism or at least write a socially-minded novel. You “get real”, as we like to say.

But evidence and prose, even the best, has limits; you may have noticed how shrill and hammering some journalism can be, or balanced so finely to the point of bland factuality. And while a well-written novel can be both entertaining and edifying, novels–extended prose storytelling– tend to be long and leisurely. Even short stories are not short enough when you want to get to the imaginative and emotional essence of experience, wallow in the frisson of language and reality, either your own or someone else’s. Sometimes, in the face of great grief or tragedy or joy, or in reaction to the bland and dire facts of for and against, only a poem will do, only a poem will properly soothe.

Politics and poetry can, of course, be successfully wed in a political poem, loosely defined, or in political idealism, but I see no reason why they can’t also be complementary as separate entities placed side by side. Surely a poem “about” a tree or a mosquito can be related to a piece of environmental journalism, or even to a profile of a political figure. It all depends on the poem and the person. What’s more, putting them in close proximity can help each one balance and enhance the other.

Thus my new emphasis and subtitle for this blog: Politics & Poetry.(*– see note below.) Some publications join the two, but not enough. Generally, poems are added as afterthoughts, little literary interludes, some entertainment between the main acts. But why can’t poetry hold its own in a politically hard-headed, prose-besotted world? I believe it can. In fact, poetry is the more universal medium, for it can encompass and inform the political realm while contemporary politics and politicians have little to say about the art of poetry, though they have much to say.

Today it seems that as a nation we could use both a more relevant poetry and a more poetic politics (defined broadly to include journalism), and one way of improving both is bringing the two together. 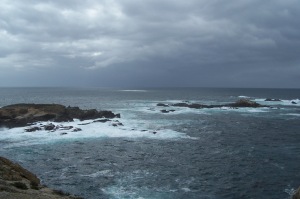 Advertisements
© 2013-2020 The Pacific. All Rights Reserved. Written work and photographs by some individuals that appear on The Pacific are copyrighted individually and so noted. All opinions expressed on The Pacific are solely the work of John Kaufman, unless otherwise stated.
%d bloggers like this: