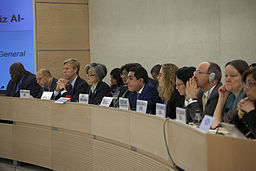 The ongoing war in Syria is a vast catastrophe; what began as a peaceable resistance movement against the Assad regime, one among many in the “Arab Spring” of 2011,  has devolved into a brutal war in which at least 300,000 have been killed and as many as 96,000 Syrian civilians have died, including more than 17,000 children. It is crucial to remember that the U.S.-led Coalition bombing in both Syria and Iraq is also responsible for some civilian casualties, though the Coalition claims to avoid purposefully killing the innocent.

The Associated Press and the Syrian Observatory for Human Rights are reporting that the death toll from the suspected chemical attack in Idlib province now at 72, including 20 children and seventeen women.  SOHR reports based on witnesses say that the military jets involved in the chemical attack were of a type both the Syrian and Russian air forces use. The Syrian government is suspected of using the toxic weapon, likely sarin. Syria was supposed to have rid itself of all chemical weapons since the chemical attack in 2013 that killed more than 1,000 Syrians in the suburbs of Damascus.

It is an odd fact of war that only so-called “war crimes” are condemned as “heinous” and “acts of barbarism” that will not be tolerated. As long as war plays by its own rules, war is deemed necessary and a traditional part of international relations.

Meanwhile, the Russian government now claims that bombs struck a “terrorist” chemical factory thus releasing the nerve agent into the air. But as CNN reports, there is no evidence for this claim and what evidence there is, including eye-witnesses and expert opinion, points to Syrian jets dropping a chemical bomb. This attempt by Russia to provide what appears to be a made-up excuse for Assad’s army only makes Russian complicity all the more reprehensible.

The Trump Administration condemned the chemical attack in Syria but primarily blamed the Obama Administration for failing to act militarily against Syria.  Mother Jones points out that Mr. Trump himself had urged then-Pres. Obama (via Twitter, naturally) not to launch an attack on Syria back in 2013.

Is it likely that Mr. Trump will now order a military strike against Syrian President Assad or call for any economic/diplomatic pressure on the Syrian regime? Just last week his administration made clear that removing Assad was not a priority, which may have something to do with Russia’s alliance with Syria. Sec. of State Rex Tillerson did issue a statement that said in part: “Russia and Iran also bear great moral responsibility for these deaths.” Russia and Iran have worked to influence the Syrian government regarding previous cease-fires in the Syrian war.

There will be calls by many in the United States and Europe for some sort of military response to what appears to be the latest chemical attack against the Syrian people. It is always tempting to demand humanitarian military intervention, and certainly the Syrian people have suffered immensely. But Obama (and Congress) chose not to take major military action in Syria for good reason: it would likely lead to a wider, more deadly war. Obama chose diplomacy to eliminate Syrian chemical weapons, and apparently not all capacity to make/use such weapons in Syria was eliminated.

But given Assad’s desperation and draconian methods, what would he do if provoked by a U.S. attack? How many deaths and refugees would a larger war create if Russia and/or Iran came to Syria’s defense? It is possible to argue that the conditions in Syria cannot get any worse, and we have to do something. I understand the frustration. And yet we won’t end this war, or any war, by adding to the violence and terror. Nor should the U.S. risk sparking a much larger war in the Middle East. There is much we can do in terms of diplomatic condemnation and pressure on Russia, Iran and Syria and that should remain the more prudent path.

The United Kingdom has said it is not considering military retaliation against Assad at this time and has called, with France, for a meeting of the U.N. security council to condemn and discuss the attack. At the U.N. meeting today, U.S. ambassador to the U.N. Nikki Haley did speak out against Russia’s role in Syria and she threatened a strong U.S. response:

“Time and time again Russia uses the same false narrative to deflect attention from their allies in Damascus. How many more children have to die before Russia cares? . . .  When the United Nations consistently fails in its duty to act collectively, there are times in the life of states that we are compelled to take our own action. For the sake of the victims, I hope the rest of the council is finally willing to do the same.”

Just what sort of “action” Haley meant is not clear; the NY Times calls it “an ominous warning.”

Trump himself said today that Assad is to blame and such an attack “cannot be tolerated”; it will be tempting for Trump, after blaming Obama for not attacking Syria, to launch an attack to curry favor and rally the nation behind him. Liberals and Democrats should resist such patriotic zeal and find our anti-war voices. Much could and should happen diplomatically to end the war in Syria.