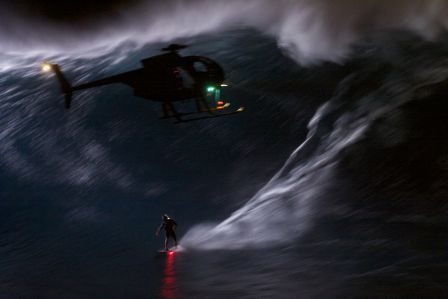 Mark Visser surfing at night on Jaws Beach in Maui. He used the helicopter for safety, a surfboard LED light and floatation vest LED light to locate him in the water. The ride earned him the nickname Night Rider. (Photo By Erik Aeder [CC BY-SA 3.0 (http://creativecommons.org/licenses/by-sa/3.0)], via Wikimedia Commons)

“We hear all our lives about the ‘gentle, stormless Pacific,’ and about the ‘smooth and delightful route to the Sandwich Islands,’ and about the ‘steady blowing trades’ that never vary, never change, never ‘chop around,’ and all the days of our boyhood we read how that infatuated old ass, Balboa, looked out from the top of a high rock upon a broad sea as calm and peaceful as a sylvan lake . . .  and named his great discovery ‘Pacific’—thus uttering a lie which will go on deceiving generation after generation of students while the old ocean lasts.”

–from Mark Twain’s Letters from Hawaii

That’s some damn fine writing above, but the author should have added that it’s a good thing the so-called “Pacific Ocean” is not as placid as Balboa said. For if there were no surf to speak of on those delightful Hawaiian beaches, what we call “surfing” today would have just been gliding. Like the “paddle boarding” that’s all the rage and puts me in a rage every time I see it: you want to go a rowin’, get yourself a proper boat that can a handle a bit of chop. Want to get your feet wet? Go swimming.

It has unfortunately been brought to my attention (for I wish to remain ignorant of many modern things) that the noble sport of surfing, invented by the native people of that Pacific island chain known to me once as the Sandwich Islands, (so named I learned because mariners thought it a good place to stop for lunch) has been ruined utterly by the placing of electric bulbs on the surfboards so that a few daredevils may surf at night so as not to be inconvenienced by crowds, lost at sea or smashed into by fellow surfers. I ask you: where is the sport in that? If you are going to risk your life for a thrill, go all the way, I say.

These illuminated surfers ought to be putting on blindfolds during the day to make the sport more exciting. Surfing by ear– now that’s being one with the sea. Just like the dolphins and whales that do their surfing by sonar. Dolphins don’t even need a board. Then there is the shark problem. Sharks are hungriest at night, and they don’t need to see to eat. They just swim around blindfolded and when they bump into something, they take a bite. Dolphin. Surfer. Republican or Democrat. It doesn’t matter. But surfing with a light is like inviting a shark to dine with you. On you, actually. Admittedly, avoiding becoming food for sharks might be rather thrilling. I’d prefer to watch the sport from a well-lit beach chair. And I’d be rooting for the sharks.

But the real danger of night surfing is that once the secret is out and attracts a crowd, some brilliant capitalist is going to put up big spotlights on the beach and charge people to go surfing on his/her well-lit waves. And if the Pacific is pacific that night they’ll be this wave-making machine and maybe a scary-looking fake shark or two. You see how bad this whole thing can get.

You want to get wet at night? Take my advice: take a bath. Turn the light off if its more thrilling.